Son: What do you think about Jeremy Corbyn’s anti-Semitic problem?
Mother: I don’t think Jeremy Corbyn is anti-Semitic.
Son: Would you vote for him?
Mother: Yes.
Son: When I see family members, young people, constantly with a mobile phone at hand, I am aware of possible microwave damage. Do you have a comment?
Mother: I tend to think they have their mobile phones too readily at hand. They are fine in their place, but probably grossly over used.
Son: Are you aware of the fertility dangers?
Mother: I have heard about it, but it hasn’t penetrated my brain to much of a degree because it doesn’t affect me I suppose.
Son: Have you ever heard of Barrie Trower?
Mother: No.
Son: Do you have any thoughts on 9/11?
Mother: Not very many. I know there is a theory that it (the official version of events) is not what is stated; things that are not publicly known about.
Son: On BBC R4, John Humphrys talked about Alex Jones and his pending court case regarding Sandy Hook. Do you know who Alex Jones is?
Mother: Alex Jones is the girl on the sofa on the One Show.
Son explains Alex Jones, Sandy Hook etc… : Have you heard of Sandy Hook?
Mother: No.
Son: Do you contemplate or have a comment on the so called chemtrail patterns in the sky?
Mother: I’m not very happy with them putting stuff in the sky
Son: You are assuming someone is putting stuff in the sky? Do you look up into the sky and think that looks a bit odd?
Mother: Yes. Particularly things in very straight lines.
Son: Do you have a concern about anthropological climate change?
Mother: I have a concern about things being put into the atmosphere, rather than climate change. Climate change is due to the movement of planets.
Son: So, do you think Sir David Attenborough and his colleagues can change the climate?
Mother: No.
Son: Do you worry about your carbon footprint?
Mother: No.
Son: Does 5G mean anything to you?
Mother: I’ve heard about it, but not a lot; bunches of people deciding what others think; control is what it’s about.
Son explains 5G, Agenda 21….
Son: I was born in 1963. Who killed JFK?
Mother: A chap called Oswald was accused. Who actually killed him could be a different matter.
Son: Are you aware there was a US congressional hearing to investigate and conclude it was likely a conspiracy involving more than one person?
Mother: Somewhere at the back of my mind I am.
Son: Any comment that you want to sign off with?
Mother: No… your question on Corbyn; he has the majority of people’s interest in mind and more of a peace maker than war monger. Not a killer. 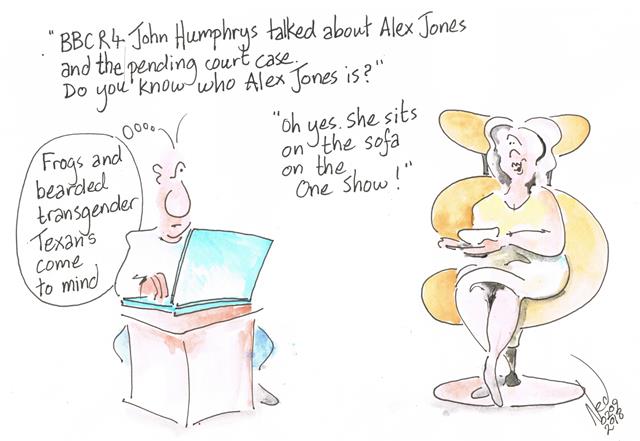 How your community is implementing AGENDA 21: