Imagine: We all read each other’s thoughts; you can read everyone’s thoughts, and they yours. This was a thought I pondered, just for fun, as a young boy.

Does someone somewhere already have that technological ability; to access human thought?

In the beginning was the word? Would we need bother with words if we merely read one another’s thoughts? Would it eliminate or fortify thought crime? Author E. Michael Jones says in the beginning was logos, according to the original Greek translation. There’s a difference between word and logos.

Back to the everyday… and the latest is Baroness Varsi decrying Islamophobia… oh God, what next? Energy goes where attention flows and it seems some endlessly focus attention on race, creed and colour.

It seems every day Margaret Hedgehog or Rabbi Sucks Sacks or Barry the Gardiner or someone is condemning wide spread anti-semolinaism running rife throughout our country, though I never see, hear or experience it. Yes, I refer to semolina. Should I be more specific? Can you tell what exactly a semite is? Should it be Semite with a capital S? What exactly is a goy? Should that be with a capital G?

I am still perplexed how Margaret Hedgehog can call Jeremy Corbyn “… that fucking racist and anti-Semite…” and not be held to account. Indeed, she was invited to the BBC R4 Today programme next morning to share her grievances, her victim-hood and explain why the vile prejudice she perceives everyday culminated in her desperate need to express herself with expletives. Corbyn was said to have uttered ‘stupid woman’ under his breath and was demonised for it. It’s a good job he didn’t utter something like ‘fucking racist and anti-socialist’ under his breath. Is it some are more equal than others?

Anna Sourbuttry can refer to Trump and Brexiteers as racist, neo-Nazi, white supremacist, narcissistic, xenophobic, sexist, misogynist…. yet, woe betide anyone call her the same name. I thought it hilarious that she was called a Nazi. Anna the Nazi? Poetic justice? It seems her accuser was even associated with a self-proclaimed Zionist. I am reminded of MP John Mann accosting Ken Livingston for suggesting Nazis collaborated with Zionists. Why is an idea, a thought, so offensive? What is the accurate historical relationship between Nazis and Zionists and, God forbid, might John owe Ken an apology?

I am white. I didn’t think of myself as white until creed and colour identity was foisted upon me year after year after year. I am more flesh coloured? Pinkish? A mixture of tones? ‘White’ is a comparative description at best. I am male. I was baptised Christian. I have a penchant for sex with females rather than men; indeed, my poop-shoot works well and I have no intention of anything going up it rather than down and out of it.

I miss art critic and ardent poop-shoot engager Brian Sewell greatly. His memoirs chronicle his sexual proclivities, but I did not dislike him because of his personal peccadilloes. He was a dear friend; I did not preclude him because of my ist, ism or phobia.

I don’t care what your penchants are, so long as they are not forced upon me. Why should I care if you are ‘racist’, so long as it does not impinge upon my sovereign being? Isn’t a racist thought, just that, a mere thought? Your thoughts are your own and if you have a disposition against another because of their creed, colour or gender, that’s your choice, not mine. I think there’s a lot to be said for the old adage ‘sticks ‘n’ stones may break my bones, but words will never hurt me’.

How do you change a mind of prejudice thought? Electro-shock therapy? A programme of re-education? Or just leave them be?

The recent, incessant accusing of Corbyn and anyone or anything that may fall into the huge ballpark which is anti-Semitism is so bloody tedious, I’ve had enough. If you want to accuse me anti-semolinaism, Islamophobia, racism, sexism, any ist or ism or phobia, be my guest.

Apparently, I am not one of ‘God’s chosen people’. Am I to limit my thoughts, contemplation and questions to your parameters? If I ponder what I might deem humourous, for example ‘God’s chosen lunatics’, am I committing a thought crime?

How about contemplation such as…
Does anyone know when Israel might openly declare its nuclear arsenal (Gooners! Gooners!) as it so demands of Iran?
Can Zionism be categorised as Fascism with a mythological rationalisation for terrorism and territory?
Did anyone at the BBC or within Westminster see the Al Jazeera documentary The Lobby? The scene of Joan Ryan discussing a £million bung with an Israeli agent is glorious to behold. Imagine if that agent had been Russian; I bet John Bumhumphrys and the BBC R4 Today team would have been on it in a flash.
Did Moses and Jesus criticise Jews? Does it mean they too were anti-semolinaites?
What are the realities of living in the occupied West Bank? Have any of you tried buying a direct flight into Palestine recently?

It seems the brutal treatment of young Palestinians, children, teenagers, even toddlers, is an everyday occurrence under the Israeli reign of terror. It appears Israel is far from an ethical realm and indeed, institutionally racist toward the indigenous people of the land and abusive to its poor.

Is Israel a religious ethno-state? I don’t much care what kind of state they want, so long as it does not hurt or impose upon others, but apparently it does. I wonder how many MP’s are Friends of Israel or Palestine.

For the record, as far as I understand, Israel is NOT all Jews, just as Tony Blair and his WMD lie did not represent all British people. Still, Bliar’s mate Lord Falconer is being touted to chair an inquiry into semolina and the Labour party. No Zionist connections there then! You can’t make this stuff up; such chutzpah!

My Jewish uncle says, “Don’t be a mug…” and anyone who still believes that racism or anti-Jewishism is rampant in the UK or that the Westminster MP’s sincerely represent the will of the people… is a mug!

If people persist on focusing on creed, colour, race and gender identity differences, I guess these issues will doubtlessly become even bigger issues and problematic. The whole business seems to be a divide and rule Hegelian dialectic.
https://www.collinsdictionary.com/dictionary/english/hegelian-dialectic

So, I am initiating my own campaign and dialectic. I have had enough of the exploitation of the Goy with a capital G to fight wars for others. I have had enough of being demonised and accused daily on the BBC and within Westminster. I have had enough of The Lobby influencing our elected MP’s. I have never been a slave owner, never invaded another foreign nation state, do not employ or engage others based upon creed, colour or gender and I stand proud in declaring my organ has been used in vagina, not bottom engagement.

I’ve had enough and from this moment forth, if you accuse me, I’ll retort that you are being Goyist or displaying Goyism and, therefore, must surely be Goyphobic and anti-Goy! 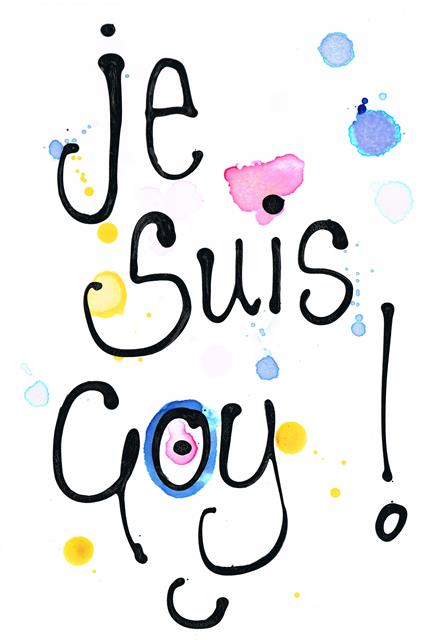