In 2002 I produced a portrait of Colonel Gadhafi for a Turkish construction company commemorating a 30 year working relationship with Libya. 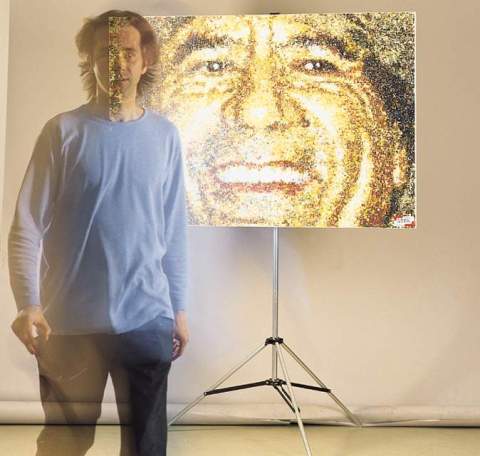 Under President Obama’s watch Libya was invaded and in 2011 Gadhafi was taken, reportedly raped by bayonet and murdered without trial or jury. The video clip of Hillary Clinton’s “We came, we saw, he died…” has since done the rounds…
https://www.youtube.com/watch?v=jLBIHXWE_rw
… has since been removed, so let’s try:

The likes of BBC R4 Woman’s Hour continued to roll out the red carpet for Hillary and provide platform for her to make derogatory quips in reference to Trump. As of July 2020 Trump still has not started a war and does not appear to carry the same sexual allegation baggage as Hillary’s husband, but still the BBC infer allegation toward Donald, but not Bill.

President Obama and associates over saw the destruction of among the most prosperous, stable nations within the African continent and the resulting chaos included the establishment of a slave trade market in Libya whereby a man could be allegedly sold for up to $400. If you want corroboration on that, I recommend historian, journalist, author and online commentator Ryan Dawson at www.ancreport.com.

We are under a psychological attack which is inviting us to relinquish individual freedom and liberty. It is manifesting as universal credit, a cashless society and stepping toward every moment of everybody being monitored and regulated. Communism? Fascism? Totalitarianism? Collectivism? However you wish to categorise it, covid1984 slavery beckons. In the past physical enforcement and weapons of war have been used. Today it is psychological warfare; compliant acquiescence, consent of the willing, submission of the fearful. Masks reduce blood oxygen, increase carbon dioxide back into the body and would appear a ridiculous practice to protect against a so called respiratory disease which requires free flowing fresh air. I do not need a PhD in medicine to realise this; it is surely common bleedin’ sense. Yet, not only are face nappies being strongly recommended, people are being encouraged to self-police the wearing of masks among those who dare go bare faced. We are instructed to maintain distance from one another for fear of spreading disease. Do not touch one another! You will do as you are told!

I do not recall ever disliking or begrudging others based on skin tone. Indeed, the idea of seeing a non-Caucasian, someone different looking to me, was an exciting prospect. School, media and peer pressure over decades have forced the concept of racism into my every day. I have never owned a slave, not been part of the colonial era and tired of being expected to announce I am not prejudice or racist. I want to say words I’m not supposed to even think, just because I am not supposed to. It is like telling me not to dislike pink elephants. I harbour no prejudice against pink elephants, but you keep telling me not to be pink elephantist! I thought we defeated Hitler to be free to tolerate the unpalatable thoughts of others. I feel the urge to prove I am still free to express what may be unpalatable thoughts in our allegedly free society. I am observing individual freedom under attack. It is step by step theft of personal liberty leading to a slave society.

I have read about the Tavistock Institute and the concept of social engineering. Most have never considered Tavistock or social engineering. Every time I hear the BBC Radio 4 Today programme introduce the latest spokes person from the Brookings Institute or Chatham House, I suspect social engineering at play. I understand there has long been a directive to change education from one of critical thinking to a Prussian-Frankfurt school style of training more akin to the method of Pavlov’s Dogs. I suspect most teachers aren’t even aware of this methodology and quietly creeping revolution that has been infesting generations over time. Here’s an easy to read introduction:
https://archive.org/details/TheLeipzigConnection/mode/2up

We are frequently warned of an extreme right-wing movement when we have Antifa, Extrastinky Rebellion and Black Lives Matter in the streets, attacking people and destroying property. I would suggest these organisations are of the political left rather than right and certainly more radical and extreme than peaceful. I even wonder if the idea of right-wing has been invented to take attention away from the real enemy which is by default of there being a right-wing, called left-wing. I again reference Ryan Dawson who says the Unabomber Manifesto perfectly predicted how the left would evolve:

I was so disappointed to see my Arsenal football team take a knee for Black Lives Matter, wear BLM badges on their shirts and the football club display huge BLM adverts within the empty stadium seating area. Arsenal FC, for long considered one of the more conservative and aristocratic clubs, today openly supports Communism. I have called and e-mailed the club and even written in hard copy to Arsenal Chairman Ken Friar asking why he is supporting a Communist movement. No response thus far.

Asking politically incorrect questions has become taboo and the BBC will never engage such thoughts or articles as:
George Floyd Was Not Killed By Police by Paul Craig Roberts:

George Floyd Was Not Killed By Police

The context of the George Floyd case and the Marxist and Communist roots of BLM are laid out within this independent documentary. I give warning of violent real life scenes:
Black Lives Matter Documentary: Going Blackwards:

This documentary has been posted to Bitchute as well as YouTube, because YouTube have long been censoring material not conducive to their political ideals. Thus far this documentary has remained available. I might add the maker of this film has a ‘black’ wife. It seems ridiculous I even consider it appropriate to state this; who cares what colour people are? It seems the BBC, legacy media and the politically correct mind set of today’s society care and insist you care too. Jazz musician, philosopher and author Gilad Atzmon has written about identity politics and how it has become common place for the politically correct to describe themselves ‘as a…. black, as a woman, as a gay, etc.’
Gilad has of course expressed himself all too freely to the extent he is included as a ‘black sheep’ in a list of baddies by the ADL…
https://www.adl.org/resources/profiles/gilad-atzmon
Dare I observe, the Anti-Defamation League seem to specialise in defaming people.

Despite Gilad’s black listing, I have used his musical skills to provide a theme for a couple of videos…

The issue is further confused when you have the likes of Israeli-Australian Avi Yemeni, like Gilad, an ex IDF soldier, present the reality of Black Lives Matter while he apparently supports Israel and the annexation of Palestinian land:

I found the mob rule and removal of the Edward Colston statue in Bristol uncomfortable, let alone unlawful. How many statues of historical figures symbolise untarnished lives? I see the story of today being distorted, let alone history of decades and centuries ago. I was born 1963 and if Lee Harvey Oswald was the sole assassin of JFK, I’m the Queen of Sheba. The victors write the history to the extent our current day reality is distorted and manipulated to entice, invite and secure our acquiescence.

What Black Lives Matter has done is lead me to research slavery and discover apparent facts I had not even contemplated. Yes, I grew up with the impression of black slaves and white slave masters. I remember the TV series Roots and Kunte Kinte. I experienced the ‘correct’ education whereby as a ‘privileged white’ boy, I was introduced to my supposed guilty past. I did not think of myself as white until it was categorically pointed out that I am. I now know, I also had little to no idea about the slavery imposed upon the Irish. Within the first 15 minutes or so of this podcast by Tim Kelly, I was informed of the Irish slave trade…
https://www.podomatic.com/podcasts/tkelly6785757/episodes/2020-06-20T05_52_08-07_00

To make a few bullet point notes: the Irish slave trade began with King James I; 30,000 Irish prisoners were sold as slaves to the New World; 1641-1652 300,000 Irish were rounded up and sold as slaves particularly to the Caribbean. This continued under Oliver Cromwell. Over 100,000 Irish children aged 10-14 were auctioned; sold to Barbados and Virginia; in 1656 Cromwell ordered 2,000 Irish children to be sold to English settlers in Jamaica; Irish slaves were price d as the lowest of the low, but bred with Africans, the skin colour tone was more valuable…
https://www.globalresearch.ca/the-irish-slave-trade-the-forgotten-white-slaves/31076

YouTuber Dana Ashlie presents a video on slavery titled:
The privilege they erased from history….

I bought one of the books she holds up:
White Cargo by Don Jordan and Michael Walsh. 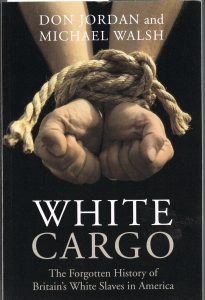 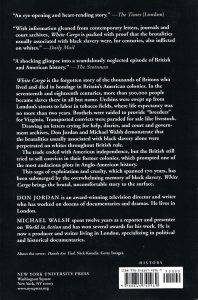 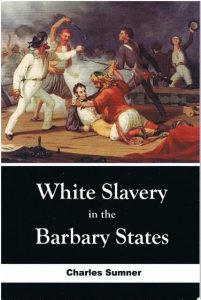 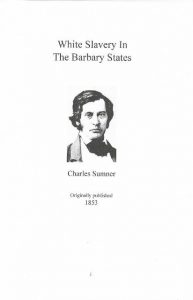 I am aware that by just posting such material here, I risk being flagged-up as a ‘white supremacist’ promoting racist material. You can find free material online e.g.
THEY WERE WHITE AND THEY WERE SLAVES
The Untold History of the Enslavement of Whites in Early America
by Michael A. Hoffman II…
http://jrbooksonline.com/PDF_Books/theywereslaves.pdf

In Charlottesville they wanted to remove a statue of General Robert Lee. In the US the Confederate flag is now deemed a racist flag and anyone waving or wearing it by default a racist. However, I doubt you’ll see this chap on the BBC anytime soon:
Southern truth from HK Edgerton
General Lee was a great man.

Sadly, the covidiots following the gender and identity political movements know not what they do. From my stand point, they are being led by the nose by means of a divide and rule technique; critical thinking submitting to yet further slavery of sorts. Imagine what proper information, news and analysis could do for us all. The BBC? If only. Unfortunately, there have long been shenanigans at hand and those who perpetrate such nefarious policies will continue to do so until enough of us wake from our slumbers.

Slavery has been wide spread, international and conducted by all creeds, colours and cultures. The ‘white man’ does not have a monopoly on slavery anymore than the Arab or African. However, mind sets of organisations such as the Tavistock Institute indulge in social engineering and techniques of divide and rule. Skin colour is perfect for such techniques and until we all wake up, smell the coffee and cease being victims to such tricks, we risk further slavery. Freedom is not free. It has to be fought for and maintained.

We must gather our senses, engage critical thinking now, reinstall our back bone, rediscover our moral code and principles, take courage and action.

That action may be as simple as a letter to an MP declaring non-consent or asking why? Is the human being to be pharmaceutically medicated from here on in? Or might we recall thou shalt do no harm, that food is medicine and nourish the body and mind to be actively alert in fending off psychological slavery?

We must choose between servitude or service to ourselves now. En plus, slavery? Yemen? I do not see BLM or Arsenal taking a knee for Yemen.

13.02.2021 Edit
This is where the new ‘woke’ mind set is leading. The virus of political correctness, by virtue signalers who have little concept of history, is increasingly rampant. Our uncomfortable past? Slavery? How about the Irish?The Barbary salve traders? Much of the world? It’s bye bye Black Boy, a pub in Bury St. Edmunds is to be renamed from The Black Boy, to The West Gate:
https://www.bbc.co.uk/news/uk-england-berkshire-56040545