Continued from…
07 : A Globo-Homo Proposal

“There are only 3 reasons why we lose our health: physical damage, toxicity, nutrient deficiency. There is no 4th reason. Your body is not low on pharmaceutical drugs.”

This is a quote from Clive de Carle. I have followed, bought, read and listened to hundreds of ‘qualified’ health practitioners over the years, yet in the conventional sense, ‘unqualified’ Clive remains among my favourites.
https://clivedecarle.com/

Is it true? Accurate? Or merely a useful guide? Is there an ultimate answer? I like the simplicity of Clive’s philosophy and it does seem to sit well with Hippocrates: food is medicine.

How did the 3rd Reich or Bolshevik or totalitarian movements manifest? There would appear to be clues all around us. Look about you in this covid1984 clown world and observe the lesson being given. When I first saw a photo on Twitter of a chap wearing a Covid-19 Compliance Officer fluorescent jacket, I wondered if it were authentic? I did not want it to be real. It signalled the public policing the public as I heard about in East Germany or other dictatorial, totalitarian regimes.

I wanted to quote the UK Police Constable Oath, but am not sure there is a definitive one.

There is:
‘I, … of … do solemnly and sincerely declare and affirm that I will well and truly serve the Queen in the office of constable, with fairness, integrity, diligence and impartiality, upholding fundamental human rights and according equal respect to all people; and that I will, to the best of my power, cause the peace to be kept and preserved and prevent all offences against people and property; and that while I continue to hold the said office I will to the best of my skill and knowledge discharge all the duties thereof faithfully according to law.’

Is there a difference between a constable and an officer? I came across this, which appears to offer further explanation:
https://thebridgelifeinthemix.info/british-law/constable-oath/

Already, just looking for clarification of a policeman’s oath, I am finding confusion rather than clarity.

About the same time the covid1984 fluorescent jacketed compliance officer was being mentioned, I went to my local shop to post a Thank You card to YouTuber Amazing Polly in Canada. Why not? She has been putting herself in the line of critical fire and I thought a message of support would be a goodwill gesture of gratitude on my part. Her YouTube channel has since disappeared, but she’s on Bitchute…
https://www.youtube.com/channel/UCJkOZZrGNEJYDhzVwd24Bfg/videos
https://www.bitchute.com/channel/ZofFQQoDoqYT/
https://www.amazingpolly.net

I was the only one in the shop without a face nappy. I was served and no adverse comment made, but it was weird; uncomfortable. Everyone else entering the shop was masking-up. The staff were wearing a mask and another a visor; like a strimmer visor. The lady taking my cash from behind a covid1984 plastic separator shield at the P.O. counter used a bottle of sanitiser before and during my transaction. She was putting so much corporate chemical formula on her skin all day, but what point would there be in my commenting? It’s her skin and her choice. If she’s blindly following instruction, it is still her choice. She might argue it’s her job and she either follows instruction or loses the job.

We’ve been played umpteen times over and over again, for eons, by governments, corporations and legacy media. Today we have the internet. It means information can be instantly disseminated. So a game ensues: which info is legit and which ain’t? Therein lays the reason I’m not scared about a virus while others are. It’s no good pussyfooting around. This isn’t the time for ifs, buts or maybes. Covid1984 is bollox. Are there conspiring players? Yes, there always are when the state interferes in your private life.
https://www.redbubble.com/studio/promote/57011887

How about the Hippocratic Oath? It seems Thou Shalt Do No Harm is not necessarily part of modern medicine. From…
https://medical-dictionary.thefreedictionary.com/Hippocratic+oath
… find:
In its decision in Roe et al. v. Wade (1973), The United States Supreme Court rejected the authority of the Hippocratic Oath in prohibiting abortion on the grounds that the oath did not reflect ancient cultural norms but rather owed its long preservation to the influence of Judeo-Christian views on abortion. The familiar precept, First, to do no harm (often quoted in Latin, “Primum non nocere”), is of unknown origin, but it is not part of the Hippocratic Oath.

Yet more confusion than clarity.

Covid1984 is neither about science nor health. They are merely useful tools for policy justification. ‘Reset’ is one of the terms used by these eco-fascist, ‘we know what’s best for you’, one world orderists. Build Back Better is another term recently used by different international leaders. Yes, there are financial billions to be gained from a mass vaccination programme which we do not need and has no guarantee of being safe, let alone work. I will repeat, perhaps ad nauseum, has the human body been so poorly designed or damaged that we require annual multiple shots from birth to death? Hippocrates? Oaths? How about food? Yes, nutrition, which I’ve rarely heard talk about on our national broadcaster.

I have not been in need of a doctor nor dentist for some 15 years or thereabouts, and before that very rarely. Indeed, my last visit to the doctor was about an annoying foot verruca. The doctor stopped me as I was removing my sock and instructed me not to bother since he could do nothing. I subsequently dealt with the problem myself applying Oregano essential oil.

The last time I took a pharmaceutical capsule was aboard a Turkish battleship 2015 en voyage from Kushimoto to Tokyo. While painting on board I became giddy concentrating on a depiction Ertuğrul so the No:2 in command offered me a sea-sickness pill. The capsule was remarkable as I was right as rain within 30 mins, I not only completed my painting, but also took a break to sing Moondance, Fly Me To The Moon and Sweet Home Alabama with the ship’s band about 3am with the captain in the front row. I learned a lesson not to ever get hooked on such powerful pharmaceutical products.

2008-2009 I stopped counting at 7, the number of cancer related funerals I was attending. I concluded the medical establishment had no viable solution to cancer and became aware of the 1939 Cancer Act which is ludicrous and acts merely as a guard against competition to ‘uncertified’, ‘unauthorised’ health solutions.
https://www.legislation.gov.uk/ukpga/Geo6/2-3/13
I did my own research and today hold no fear about cancer. It seems the main protagonists are malnutrition and psychological trauma. There are many who have undertaken study into cancer. I have a CD by Ty and Charlene Bollinger:
https://thetruthaboutcancer.com/

You can always find detractors e.g. From…
https://sciencebasedmedicine.org/the-truth-about-cancer-series-is-untruthful-about-cancer/
… find:
“The people Bollinger interviewed are not the world’s leading doctors, but infamous characters whose non-science-based views are notorious. I was only too familiar with many of the names: Matthias Rath, Mike “Health Ranger” Adams, Joseph Mercola, Jonathan Wright, Rashid Buttar, Russell Blaylock, Stanislaw Burzynski, and Tullio Simoncini. I will restrain myself and simply say these individuals are not reliable sources of health information.”
Really? I’d like to see this author tell e.g. Dr. Rashid Buttar this to his face. Ty Bollinger also has a project exploring vaccines:
https://thetruthaboutvaccines.com/about/
How apt for today’s covid1984 clown world.

Having followed and produced cartoon illustrations for the case of David Noakes, Lyn Thyer and GcMAF, I am aware of how corrupt and inept the MHRA is. Both David and Lyn were up to very recently, being held in French prison having been terrible treated by Interpol and armed officers of enforcement. It’s an extraordinary case to have become aware of. To incarcerate anyone like this is abominable while your pharmaceutical corporate colleagues are given legal exemption should their vaccine cause harm.
https://www.nedpamphilon.uk/product/gcmaf-can-of-worms/ 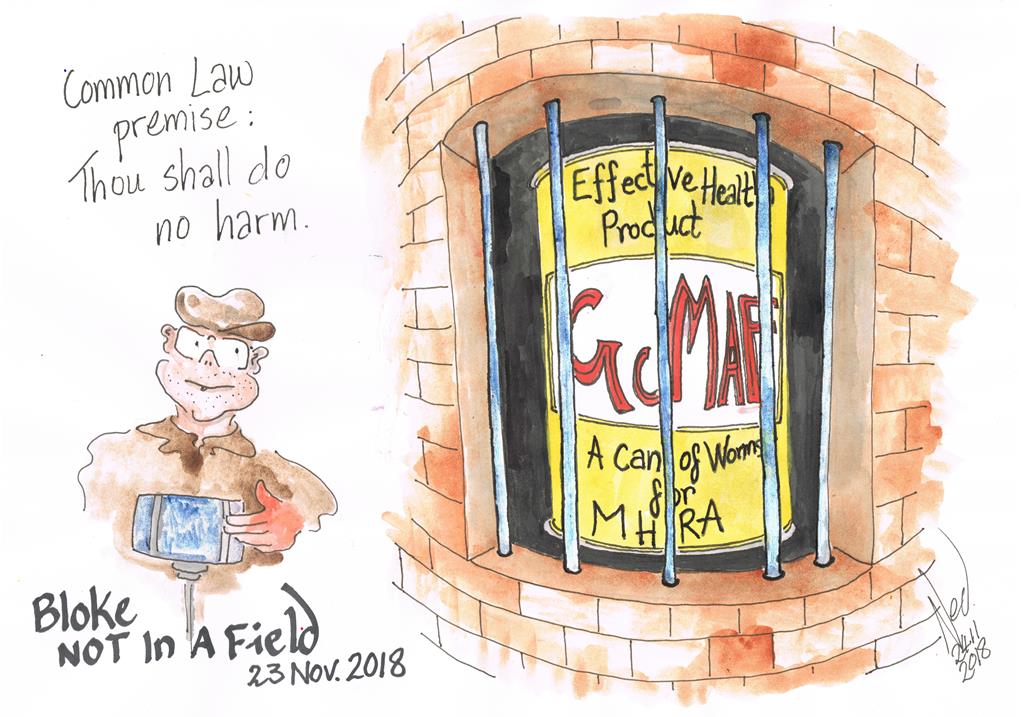 I have no intention of submitting to the ridiculous coivd9184 test, let alone take a vaccine which includes God knows what ingredients. Wearing masks is madness and reduces oxygen flow for the wearer. Why would the government instruct constrictive face nappy wearing for a respiratory disease? I do not need a PhD in medicine for my own common sense to kick-in.

The UK appears to be under attack from some form of communist- fascist-collectivist attack with the long term goal being a technocracy and you my MP, Health Munster Herr Gruppenführer Handycock appears to be the perfect stasi foot soldier happy to follow orders and implement his master’s instructions. Who are his masters? WHO indeed? Are there plans to forcibly hold the likes of me down and medicate regardless of my consent or not?

It is not necessarily all gloom and doom. There may be unintended consequences for the good too. Just perhaps Hippocratic Oaths of honour and nutritious food will prevail.