Margaret Openheimen Hedgehog called Corbyn that ‘effing racist and anti-Semite’ within the parliamentary chamber. Is this not hate crime according to their own rules? U2 singer Nobo raised his arm and mocked Swedish Social Democratic leader Jimmie Åkesson in Sieg Heil fashion, inferring what? That Akesson does not like others because of their creed or colour?

“… the Swedish, tall, blonde, blue eyed, boring…”
“… my favourite… little Le Penn has changed the name of her party so people don’t know they don’t like Jews or blacks…”

Is this not defamation of character? Is this not hateful speech? Why is it OK for some to slur others, yet others grab their entitlement to feel offended by the most innocuous of MP’s in Westminster, namely Jeremy Corbyn. It is relentless. Yesterday in Manchester a ‘huge’ rally of hundreds against anti-Semitism gathered in Manchester and again Maggie Hedgehog had her cause covered on the BBC news. It comes as the number of anti-Semitic incidents in the UK is at its highest since records began in the 1980s. Really? According to whose survey? The ADL or some such organ?

I made a note having heard a BBC R4 programme whereby Polly Toynbee stated she wants to turn The Daily Mail into The Guardian and the audience applauded. The inference again is Polly has the moral high ground. Is that the same Guardian that openly supports the White Helmet extremists in Syria; the same Guardian that advocates ‘regime change’ in foreign nation states it deems unacceptable?

My imagination conjured up the notion of Nobo the leprechaun and Maggie the hedgehog coming together to pronounce the formation of a new Semolina Party…. how does an MP get to call Jeremy Corbyn ‘that ‘effing racist and anti-Semite’ in parliament and get away with it? Quite easily apparently. 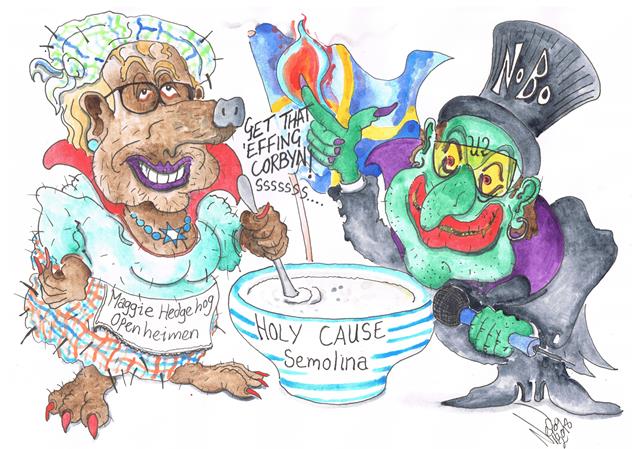 Here the ‘awful extremist right-wing’ Breitbart reports upon Nobo’s Paris gig. No, I am not a Breitbart regular; the article came to my attention as many others do from a variety of platforms. I recommend you watch the Paris gig clip. I don’t care what Nobo says, but he and his like will care and lobby against others for any remark or gesture deemed unpalatable…
https://www.breitbart.com/big-hollywood/2018/09/11/bono-nazi-salute-mocking-swedish-populists-paris-show/

The dilemma becomes more complicated. There are voices who do raise the issues of immigration and globalism in a sensible and serious manner without reducing it to racism. I like Roseanne and Diamond & Silk, but they do pile on devotion to Israel which appears to be a state based upon racial divide. What is it with this Israel business?

Imagine Gilad Atzmon talking with these ladies on the Israel business. Perhaps even more interesting might be Alison Wier.

Who promised Palestine to Netanyahu’s secular Jews? Spot the contradiction with Gilad Atzmon