“BBC? Another beauty.”
Trump’s sarcasm didn’t miss a beat. Trump’s inaugural press conference was so entertaining, especially compared to Joe Biden’s recent staged managed debacle of March 2021. Jon Sopel, the BBC ‘beauty’, went onto to prove during the subsequent four years, how impartial and unfair he was toward Trump. As for free, as Sopel described the BBC, the public pays in more ways than one; it forgoes proper news and analysis replaced by ‘fake News’…

Like CNN and the BBC, we now have another beauty on an even grander scale: covid1984 and a sociopath onslaught still not even realised by many of its targeted victims. Under Trump, the likes of South Dakota Governor Kristi Noem, who in beauty terms is genuinely easier on the eye than Jon Sopel, was encouraged to follow US constitutional law and remain open for business. By comparison we have the ridiculous figure of Joe Biden, seemingly permanently in a face nappy, who hardly knows where he is and can barely walk up the steps of Air Force 1.

I again found myself walking through fields listening to TED Radio Hour Monday 22 March. TED certainly have a nice little promotional slot on the publicly funded BBC; also funded by the Bill & Melinda Gates Foundation, but that’s another charitable BBC Media Action rabbit hole. This time it was bridge designer Ian Firth: https://ianfirth.com/about
https://www.bbc.co.uk/sounds/play/m000tfd3
The programme title was Risk. There’s a thought. Which is the greater risk, covid1984 or the covid984 jab? The figures seem to indicate the jab, yet another beauty! Anyway, Ian repeated his view as quoted on his website:
“Structural engineering is about making our buildings, bridges and structures safe, durable and sustainable, but we must also make them beautiful…”

Exactly what is a sustainable bridge? One which remains up and functioning, sustaining the traffic load? I would have thought that requirement a given. Or is it reference to the environment and carbon zero climate theory which like covid1984 pretends to follow the science while in reality apparently ignoring the science. As for a beautiful bridge, in whose eye? I don’t doubt we can agree on some bridges being more interesting and perhaps even beautiful than others, but beauty does remain in the eye of the beholder. But, when Trump referred to ‘another beauty’, we knew exactly what he meant.

How many times have I heard a musician declare they produce good music… as opposed to mediocre or bad music? According to whose ear? I never tire of Miles Davis’ Kind Of Blue. I was working on an art project when the leader of said project commented he didn’t like that jazz stuff that sounds like a bunch of smack-heads going twiddly-twiddly. He then played Hawkwind on the studio ghetto blaster. I never trusted that man’s judgement again. I’ll take the sublime beauty of Kind Of Blue over Hawkwind any day. Some may deem the London Gherkin as beautiful while others see monstrosity. Prince Charles famously denounced modern architectural carbuncles and prefers classical forms. As an artist I hardly care if the beholder sees my artwork as beautiful or otherwise. I do care if they buy it and my business is financed and, therefore, sustained sufficiently to continue.
The BBC have become an obsessive interest. They are my country’s national news and information service provider and while frequently the BBC themselves like to remind us how good they are, generally I find them appallingly unfit for purpose. Wednesday 24 March I stumbled across the The Media Show and an episode called Fighting the Covid infodemic.
https://www.bbc.co.uk/sounds/play/m000tccl
Presenter Amol Rajan, a classic BBC presstitute, was talking to Eliot Higgins, the founder of Bellingcat, an egregious, bias propaganda platform that I’ve encountered many times before via the UK Column News…
Alex Thomson of Eastern Approaches published an article 10 Monday December 2018 for UKC News referencing the regular BBC go-to for geo-political analysis,
… ‘modern analytics’ means ‘getting the likes of Bellingcat on the case to blag at arm’s length for us’.
https://www.ukcolumn.org/article/younger-generation-takes-over-mi6-%E2%80%98c%E2%80%99-saw-thoroughly-modern-spook

Or, as Sheila Coombes writes at 21st Century Wire 20 December 2019:
https://21stcenturywire.com/2019/12/20/mainstream-media-on-opcw-leaks-the-good-bad-and-downright-ugly/
‘But where do we place BBC’s Hardtalk programme hosted by Stephen Sackur? Given that on a BBC platform he undertook a necessarily soft soap interview of Bellingcat’s creator Eliot Higgins, he didn’t afford Mr. Higgins a totally free pass, injecting some discussion of Higgins’ funding and questioning the veracity of ‘open source’ investigations. Sackur was perhaps not doing this to adhere to tenets of journalistic due diligence and impartiality, but perhaps because there is a general awareness that Mr. Higgins’ house of cards at Bellingcat is at serious risk of being undermined, exacerbated by the OPCW whistle blowers’ revelations which Higgins and Bellingcat have fought desperately to undermine and discredit…’ 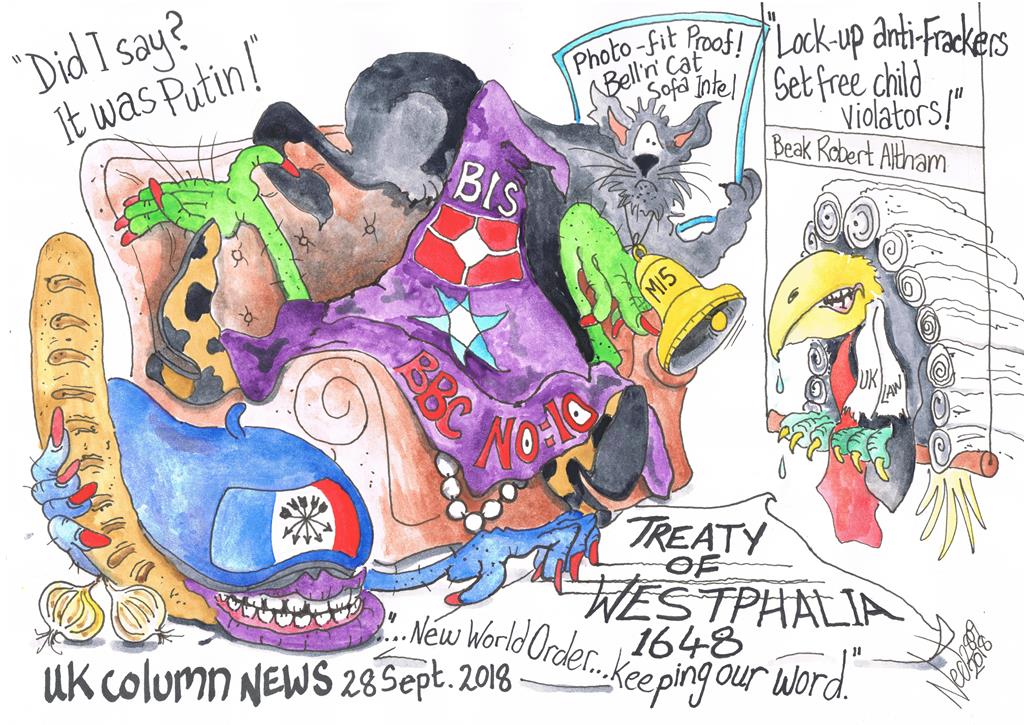 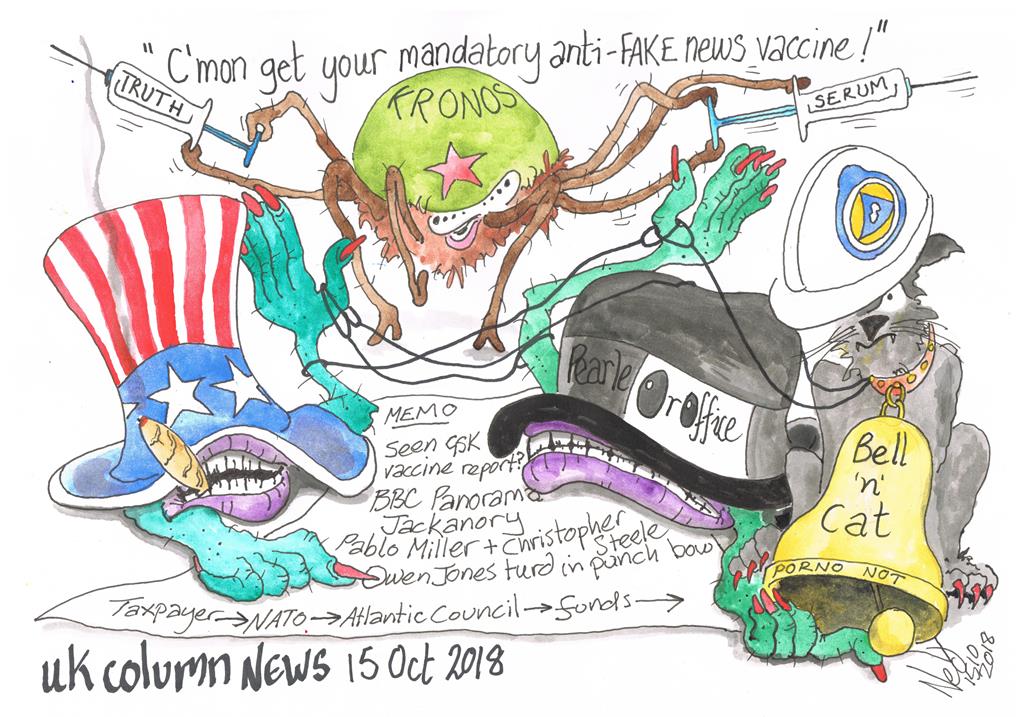 Eliot was telling Amol how the public fall into the trap of conspiracy theory and become anti-vaccination. The BBC seemingly broadcast and repeat the term ‘conspiracy theory’ weekly verging on daily. It does seem a classic case of the perpetrator accusing others of what itself does.

On Twitter I saw this:
A summary of law taken from a lawyer colleague that is relevant to COVID-19 vaccination for those who would like to be properly positioned. As the COVID-19 vaccines do not finish their trials until 2023 they are classed as experimental treatment and scientific research.
https://twitter.com/RealJoelSmalley/status/1374690032221556738

In the replying comments to the thread, a so called doctor, complete with a face nappy wearing photo, posted:
https://twitter.com/DrSimonAshworth/status/1374981470612303874
Wrong COVID vaccines have been through extensive medical research and are approved and and are not experimental treatment. Research is done on many drugs long after approval – these are not “experimental drugs” – they are proved to work and known to be safe

To which I responded:
https://twitter.com/NedPamphilon/status/1374994976220835843
This coming from a face nappy. Whether they are truly experimental or not, to say they are safe is unproven & that they work? To do exactly what? The entire vax theory is debatable. Dr., may I recommend food, nutrition & thou shalt do no harm. Face nappies? Absurd.

I cannot take any doctor in a face nappy seriously, unless they be in surgery where, as Dr. Rashid Buttar has stated, a face mask prevents particulates falling into open wounds.

The truth can be so allusive as further ‘beauties’ are offered us daily during covid1984 whether from Boris’ press conferences or by BBC flagship news programmes. Another beauty caught my ear on BBC R3, 25 March 2021, ‘Churchill’s Reputation: Anne McElvoy and guests on attitudes to the politician, his rhetoric and foreign policies.’
https://www.bbc.co.uk/sounds/play/m000tfn5
An ınteresting character no doubt and I of course I grew up under the impression he was our great war leader hero who led the nation to victory. Was the Bengal famine part of our hero’s legacy? Was Hitler wholly responsible for starting WWII or was Churchill determined to have a war regardless. Who actually won the war? I guess Stalin and his Red Army helped in the defeat of Hitler who was at least partly a product of Stalin’s Red Terror threatening Germany’s borders. Who was responsible for the destruction of Dresden and the ensuing Morgenthau Plan? I dare you to read Hellstorm by Thomas Goodrich. There is a documentary if you have the stomach. It’s way beyond being a beauty:
https://www.hellstormdocumentary.com/

These decision-makers appear so detached from the general population. Stalin over saw the Red terror. Churchill supported the carpet bombing of Dresden and the Morgenthau Plan. Today Boris has over seen the closure of UK businesses and the destruction of lives and livelihoods in the name of saving lives. I guess covid1984 has at least saved lives by devastating the flu figures. The Daily Mail reports as such:
NO cases of influenza have been detected in England this year because of tough social distancing measures, experts say:
https://www.gov.uk/government/statistics/national-flu-and-covid-19-surveillance-reports

Because of socialist distancing? Wow. What a beauty! I will add a caveat. On the one hand Trump did not waer a face nappy and encouraged a return to normal business. On the other hand, what was Operation Warp Speed all about? Yet another beauty.

Parliamentary Assembly of the Council of Europe https://pace.coe.int/en/files/29004/html… “ensure that citizens are informed that the vaccination is not mandatory and that no one is politically, socially, or otherwise pressured to get themselves vaccinated if they do not wish to do so themselves.”

Parliamentary Assembly of the Council of Europe https://pace.coe.int/en/files/29004/html… “ensure that no one is discriminated against for not having been vaccinated, due to possible health risks or not wanting to be vaccinated.”

The UK Supreme Court case Montgomery v Lanarkshire Health Board (2015) established the principle of an individual’s right to informed consent without coercion or penalty. https://supremecourt.uk/cases/uksc-2013-0136.html

The Universal Declaration on Bioethics and Human Rights protects an individual’s bodily autonomy, the right to informed consent, and the right to refuse medical interventions without penalty or restriction. http://portal.unesco.org/en/ev.php-URL_ID=31058&URL_DO=DO_TOPIC&URL_SECTION=201.html

any preventive, diagnostic and therapeutic medical intervention is only to be carried out with the prior, free and informed consent of the person concerned, based on adequate information.”

“Scientific research should only be carried out with the prior, free, express and informed consent of the person concerned.”

Although the Nuremberg Code has not been officially accepted as law by any nation or as official ethics guidelines by any association, it is considered to be the most important document in the history of clinical research ethics.

The Nuremberg Code has had a massive influence on global human rights. The Nuremberg Code and the related Declaration of Helsinki are used in Institutional Review Boards (IRBs).
https://en.wikipedia.org/wiki/Nuremberg_Code

“Informed consent” has been universally accepted and now constitutes Article 7 of the UN’ International Covenant on Civil and Political Rights. It also served as the basis for International Ethical Guidelines for Biomedical Research Involving Human Subjects proposed by the WHO.

2. The experiment should be such as to yield fruitful results for the good of society, unprocurable by other methods or means of study, and not random and unnecessary in nature.

3. The experiment should be so designed and based on the results of animal experimentation and a knowledge of the natural history of the disease or other problem under study that the anticipated results will justify the performance of the experiment. No animal trials done.

4. The experiment should be so conducted as to avoid all unnecessary physical and mental suffering and injury.

5. No experiment should be conducted where there is an a priori reason to believe that death or disabling injury will occur; except, perhaps, in those experiments where the experimental physicians also serve as subjects.

Many thousands of adverse reactions have been reported via the yellow card scheme which can be found on the .gov website, and which include blindness, stroke, and death.

6. The degree of risk to be taken should never exceed that determined by the humanitarian importance of the problem to be solved by the experiment.

7. Proper preparations should be made and adequate facilities provided to protect the experimental subject against even remote possibilities of injury, disability, or death.

10. The scientist in charge must be prepared to terminate the experiment if he has probable cause to believe, in the exercise of the good faith, superior skill and careful judgment that the experiment is likely to result in injury, disability, or death to the experimental subject

The Public Health (Control of Disease) Act 1984 provides that Regulations made under the Act may not include provision requiring a person to undergo medical treatment. “Medical treatment” includes vaccinations and other prophylactic treatment. https://legislation.gov.uk/ukpga/1984/22

Is this “anti-vax” or simply in support of basic human rights?