I originally titled this post as The Prejudice Of The Anti-Prejudice. I decided this post is fundamentally about choosing to be a victim or not; choosing to be hurt, offended, upset by the words and sentiments of another. It is as if victimhood has become a cult. I could even suggest a book was written on this cult some time ago: Unabomber Manifesto:
https://unabombermanifesto.com/

I grew up with ‘sticks ‘n’ stones may break my bones, but words will never hurt me’. Those days seem to be over, if temporarily. We are human beings born with unalienable rights. We may be at risk of theft, whether a stolen wallet or to the extreme case, rape or loss of life; the invasion and theft of our private being, what some refer to as personal sovereignty. But, if someone calls us a name or Tweets an insult, we can withdraw, disengage away from that person or that social media platform. When I read Orwell’s 1984 in 1984, little did I know that a few decades later thought crime would be labelled a hate crime and an actual so called law. If I chose to be verbally offended, it is my choice, but it is not an invasion of physical property or personal space. This is why I avoid engaging -ists or -isms.

The other evening I caught Ian ‘Wright Wright Wright’ on a repeat of BBC’s Desert Island Discs. Oh, how I loved Ian Wright as he scored goal after goal for Arsenal in his heyday.
https://www.redbubble.com/shop/ap/91918694 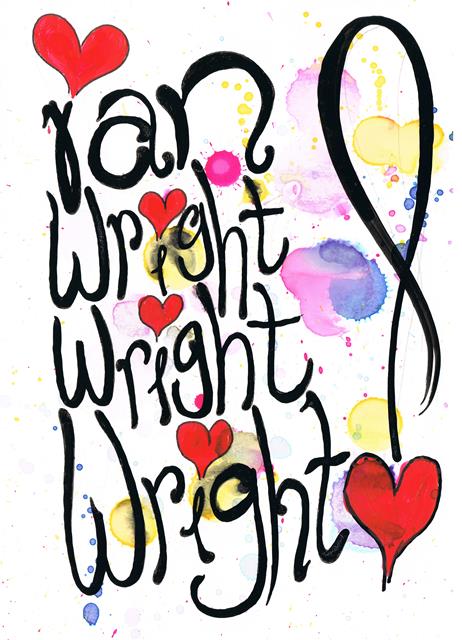 Even my eyes watered listening to Ian’s story, especially about his school teacher who had been such a positive influence upon his life. But, then ‘Ian Wright Wrong Wrong’ mentioned racism in football, the recent issues around Manchester City and England international Raheem Sterling and yet again we were being lectured by a professional footballer on how we should think and be.
https://www.bbc.co.uk/sounds/play/m0010169 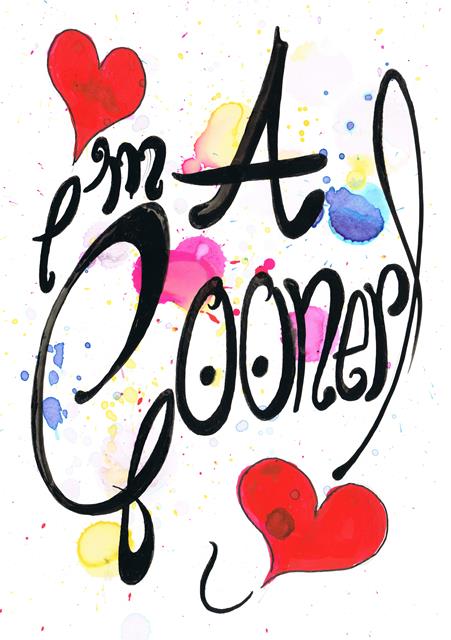 Another Highbury hero, Thierry Henry, has also waded in with the race card. Are they expecting to transform minds; to re-educate people to think ‘correctly’? If the UK is such a racist kingdom, why are non-Caucasians so successful? Why do we see mixed race couples week in and week out adorning the front covers of magazines? Why are there so many non-Caucasians fronting media shows and programmes? Why am I categorised as ‘white’? I am using the term Caucasian and not even sure that is the correct categorisation. Dare I ask is there an agenda afoot to break down the cultural identity of England, to create a multi-cultural diverse group called British and eventually a regional area of a global world order? There are those who identify as English who think so:
The English Constitution Party
Home

Is specific national and cultural identity a threat to a globalist ideal? That globalist ideal includes a digital identity for all and covid1984 is serving up that window of opportunity with the introduction of a vaccine passport. The vaccine passports will lead us into a global technocratic system whereby even the authentic procreation of natural biological human beings may be threatened by a laboratory test-tube model; except, of course, for the exceptional few.

I’ve posted thoughts on slavery: https://www.nedpamphilon.uk/02-slavery/. I might suggest Ian Wright, Rio Ferdinand, Gary Linaker and other football pundits so keen to put the likes of me to right, do a little research and for example, consider the plight of the Irish slaves, the white slavery of the Barbary States or the Africans who enslaved Africans. Slavery, racism and prejudice have not been the monopoly of the white Christian Caucasian male and I’m rather tired of being categorised as being white or supreme and that I inherit the responsibility of the past over which I had no control.

The England 1st XI football team recently lost on penalties again, this time to Italy in the European Final. Almost immediately afterward, I heard an idiot woman on BBC R4 news celebrating the diversity of Gareth Southgate’s team. These chattering media types are the ones obsessed with gender and identity politics, not me nor most of us. I am sceptical about how diverse her concept of diversity is, just as Agenda 2030 bio-diversity is not necessarily doing what it espouses to. After a most recent win and near-perfect performance against either Germany or Denmark or whichever team it was, ex-pro footballer and now media pundit Chris Sutton on BBC R5 Live, challenged callers to the show, that after years of negative callers and commentators, to, “Give me a negative about England.”

My answer would have been, taking the knee Chris; our national team’s multi-millionaire footballers kneeling in support of Marxist BLM. Southgate, not me, brought politics to the national team agenda and I am responding. I’m sick of it and so too I suspect are millions of other football fans.
https://www.redbubble.com/shop/ap/91948752 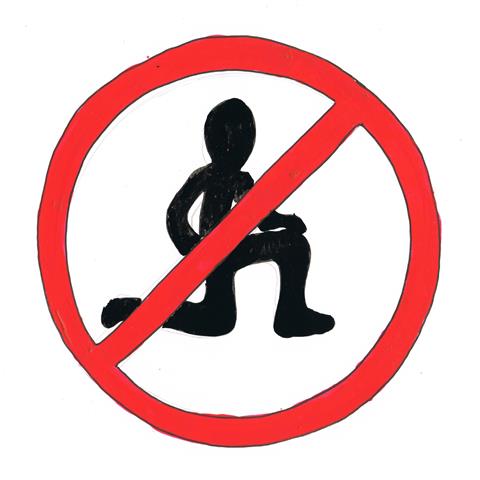 For a moment, as Luke Shaw gave England an early lead, I thought that despite the covid1984 codswallop, cultural maskism, socialist distancing, ludicrous PCR test scam and knee-taking nonsense, we might actually have something positive to celebrate. Luke Shaw had over-come tremendous injury challenges and perfectly represented a rise to victory following adversity. Instead, we lost on penalties and the media whipped-up yet more division by honing in on the ‘hate’ against the 3 ‘black’ players who missed the England penalties. Was there vitriol aimed at Waddell or Southgate when they missed penalties in the past? Was it blamed on racism or is it just that football supporters do get caught up in the highs and lows of a game and sling mud after unsatisfactory results? Especially after a year of being locked down by covid1984.

Penalties are a lottery, but the winner wins and with the final kick, save or miss, all else suddenly matters little. I hoped the exuberant Italians would shed their face nappies, go out en masse into the streets in celebration and cease their acquiescence once and for all to the covid1984 lies. I suspected even if they had, all would have reverted back to the new abnormal in the morning. Italians can tend to be a neurotic bunch of hypochondriacs from my observations and presumably my making even this comment risks accusation of racism or xenophobia or some such other awful attribute I must chastise myself and seek repentance for. With that, I must include an edit to my earlier draft: as of today, 17 October 2021, Italians nationwide are bravely standing up to and protesting again totalitarian covid1984 vax passport regulations whereby you must be marked and numbered to work. Bravo Italians!

London Mayor, Sordik Khant as I refer to him, must be among the most unpleasant, divisive mayors London has had; perpetually playing the race card:
https://www.dailyadvent.com/news/721f6653a5a5fe96def3c12e12c81c94-Sadiq-Khan-I-need-24-hour-security-because-of-my-skin-colour-and-the-god-I-worship

He is also fun to mock and ridicule in pen and ink. 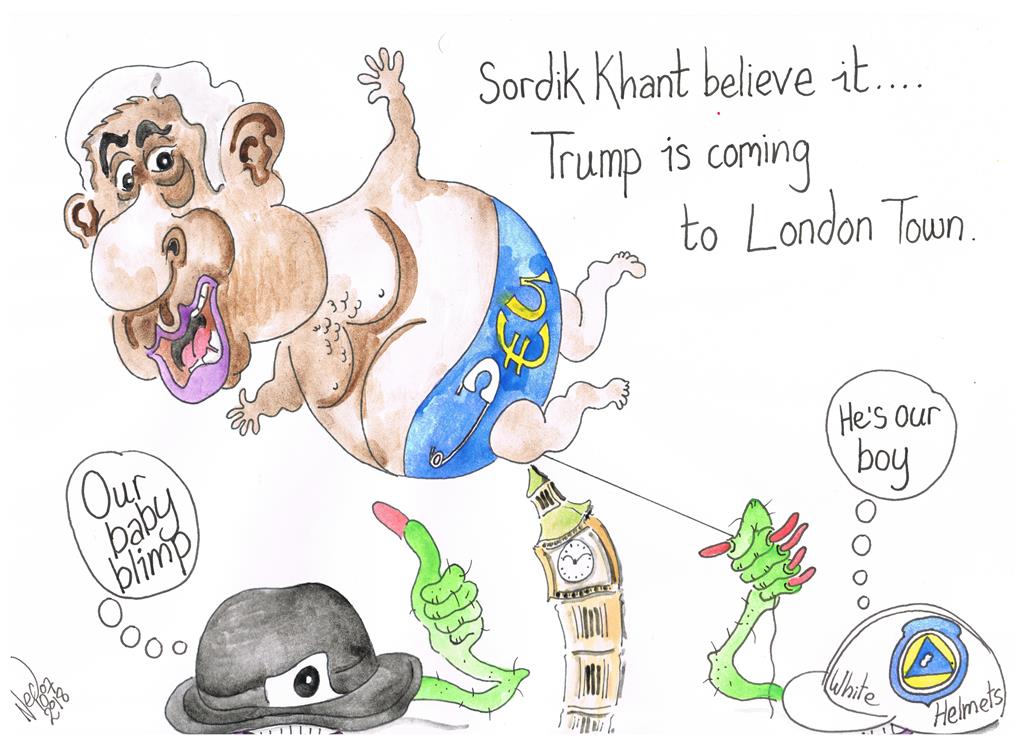 Following the night of defeat and an idiot heralding the successful diversity of Gareth Southgate’s losing team, the morning BBC R4 Today programme offered up another idiot, this time a male ‘expert’, heralding how successful face masks have been in preventing the spread of the virus. On the contrary, I suggest masks have contributed toward ill-health.

Covid1984 has given ample opportunity to declare wide spread victimhood; if you don’t wear a face nappy or get the vax, others take the opportunity to accuse you of putting their lives at risk. The BBC continued to report on the three England players, Sancho, Rashford and Saka, who missed penalties and subsequently became victims of online racial abuse. We must all Kick It Out! Mustn’t we? If the BBC had not told me about the ‘online hate’, I would not have known, but then the legacy media is relentless in its contribution to divide and rule as well as selling the notion of a deadly plague sweeping the globe, plus of course, the ever present threat of man-made carbon dioxide induced climate change. Yes, we are all victims of climate change, don’t you know? Plus, the planet is a victim of the human being and all round, being a victim is opportunity all round to blame others for our own misgivings.

Covid1984 has ushered in cultural maskism, socialist distancing, the right to protest if you want to pull down a statue and a BBC blind eye to those thousands who walk through London protesting against the draconian restrictions of covid1984 policy. Indeed, it seems anyone participating in the anti-covid1984 protests is soon to be targeted as an extremist, even a right-wing extremist. It’s clown world continuum.

For example, there is Hope Not Hate, so I understand, in part funded by globalist George Soros:

Really? I do not encounter far right extremism, whatever it is. We do frequently see Extrastinky Rebellion and BLM protesting and usually given exposure by the BBC. I wouldn’t know where to go to find a group of ‘far right’. Perhaps I could hunt down an obscure group of self-proclaimed neo-nazis somewhere. But where? I suppose Hitler, that National Socialist, is the poster boy of ‘far-right’ socialism. Is Stalin then the poster boy of ‘far-left’. Who killed more, Hitler or Stalin? Is it a competition, which one was worse and, therefore, the nastiest?

Still, despite England penalty failure again, I was able to console myself that at least Herr Gruppenführer Madge Handycock had resigned as UnHealthly Munster; only to be replaced by vax czar Anton LaVey aka Nadhim Zahawi. Handycock remains MP for West Suffolk and has even completed the London marathon as part of an attempt to endear him to the electorate again. I wouldn’t put it passed his constituents to vote the muppet in again. I guess resignation over a snog and grope sex scandal tends to be good for a politician’s reputation; at least it gives the perception he likes grown women and not little boys. It’s certainly preferable to being held to account for manslaughter and possible charges of euthanasia by sanctioning a massive increase in the use of Midazolam on his watch.
A Good Death:

Herr Handycock had apparently been appointed UN envoy to Africa. Some days later that appointment was rescinded. The last thing Africans need is Midazolam Matt, but the powers that be obviously see Matt as a safe pair of hands to do their bidding; or at least they did. God, nature and whatever has the greater power, please bring magic to these shores and bring a halt to the insanity and madness.

Sticks ‘n’ stones may break my bones, but words will never hurt me? Hate crime is thought crime and now apparently legislated crime straight out of the 1984 manual. The government and society seems to be encouraging victimhood whether the skin tone of a footballer or protesting against mandatory mass medication policy. Meanwhile, issue non-resuscitation orders and Midazolam, be hailed an adulterous sex scandal hero for snogging and groping and you can be recognised as the makings of a successful official arsehole. Watch this space for the further news in the saga of covid1984 clown world UK 2021.

I have frequently repeated my cynical description of football as 22 over-paid tattooed tossers chasing a bag of air, but I love it. The power and joy of football was summed up when I was based in İstanbul and Turkey narrowly lost 2-1 to Brazil in their first ever World Cup Finals. Hasan Saş (sounds like sash) scored Turkey’s first ever World Cup Finals goal and the country went nuts and still celebrated the magnificent team effort despite the loss.
https://www.redbubble.com/shop/ap/56544136 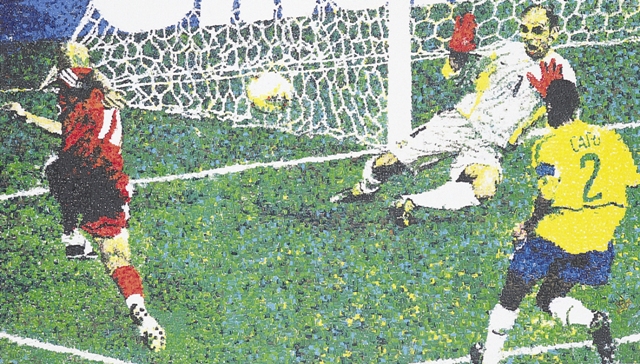 Edit 18.10.2021
An example of a BBC exponent of promoting and highlighting victimhood is the one and only Marianna Spring:
‘I get abuse and threats online – why can’t it be stopped?’
https://www.bbc.co.uk/news/uk-58924168
‘We set up a fake troll account across the five most popular social media platforms to see whether they are promoting misogynistic hate to such users.’
This is the same victim who infiltrates anti-covid1984 passport groups to highlight individuals as right-wing extremists, conspiracy theorists, anti-vaxxers and undesirables according to the BBC official version of everything. Oh Marianna, the truth will out, the truth will out:
https://www.redbubble.com/shop/ap/78541376 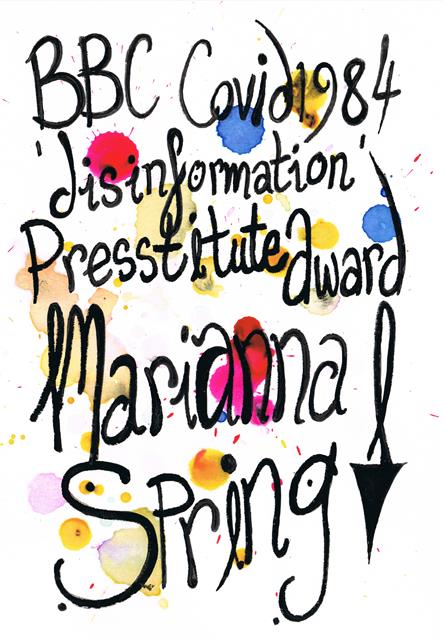