Dr. E. Michael Jones talks directly and clearly to Jan Irvin with humour on subjects including Darwin, Hawking, Dawkins and Judaism. I guess he broaches several taboos all in one session, which of course appeals to me; discussing controversial ideas I do not necessarily agree nor disagree with, but the BBC would deem politically incorrect and probably not engage.

I was tempted to title this Turtles All The Way Down… go to 21.30 mins for this reference to the the symbol of cosmology in India…. 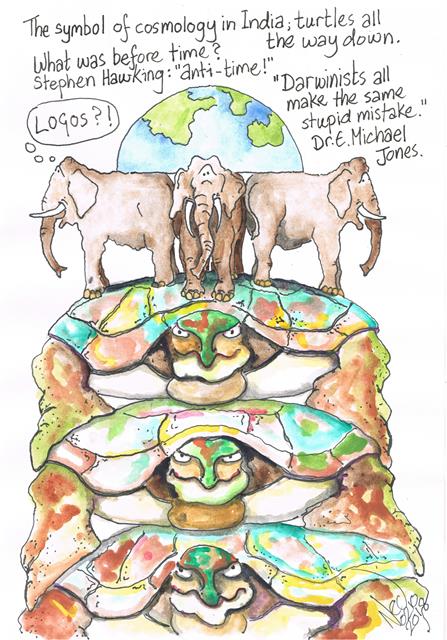 15 mins
The universe brought itself into existence…
18.50 mins
The eye can’t come from a blind ameba… that which is cannot come from that which is not”
20.10 mins
Stephen Hawking, he just died a week ago or so. What was before time? Anti-time….why didn’t the whole world burst out laughing when the guy said something this stupid…?
Before time, there was no time, that’s why it’s time!
Darwinists all make the same stupid mistake.
21.30 mins
Symbol of cosmology in India….
turtles all the way down…
Before matter there was anti-matter and before anti-matter there was matter-matter?
Metaphysics 101 and every Darwinist flunks it.
Darwinism wrecks reason.
The Michelson–Morley experiments showed there was no earth motion what so ever… (wow!)

Scientific Proof THE EARTH DOES NOT MOVE : Michelson–Morley Experiment

The stars move while the earth is stationary…
Note:
https://en.wikipedia.org/wiki/Michelson%E2%80%93Morley_experiment

Although the estimated difference between these two times is exceedingly small, Michelson and Morley performed an experiment involving interference in which this difference should have been clearly detectable. But the experiment gave a negative result — a fact very perplexing to physicists. Lorentz and FitzGerald rescued the theory from this difficulty by assuming that the motion of the body relative to the æther produces a contraction of the body in the direction of motion, the amount of contraction being just sufficient to compensate for the difference in time mentioned above. Comparison with the discussion in Section 11 shows that also from the standpoint of the theory of relativity this solution of the difficulty was the right one. But on the basis of the theory of relativity the method of interpretation is incomparably more satisfactory. According to this theory there is no such thing as a “specially favoured” (unique) co-ordinate system to occasion the introduction of the æther-idea, and hence there can be no æther-drift, nor any experiment with which to demonstrate it. Here the contraction of moving bodies follows from the two fundamental principles of the theory, without the introduction of particular hypotheses; and as the prime factor involved in this contraction we find, not the motion in itself, to which we cannot attach any meaning, but the motion with respect to the body of reference chosen in the particular case in point. Thus for a co-ordinate system moving with the earth the mirror system of Michelson and Morley is not shortened, but it is shortened for a co-ordinate system which is at rest relatively to the sun.
— Albert Einstein, 1916

Does The Earth Move For You?

24.45 mins
Einstein’s theory of relativity saved the phenomena, that’s why he’s important.
Richard Dawkins insists everything is an infinite progression of small steps.
Where’s the talking animal?
The human being is the only animal that has logos.

38.00 mins
It was Adan and Eve, not Adam and Steve.
We have to talk about this stuff because the the oligarchs have forced it upon us.
The oligarchs believe truth is the opinion of the powerful
Denigrate morality and you denigrate truth. Oligarch’s have money and power. The only tool against money and power is moral law; truth.
Eliminate moral law and you eliminate the concept of being; of meaning to life; procreation!
Sodomy is meaning, pointless recreation, so you don’t ask for a raise.
Michel Foucault: pact with the devil….
https://en.wikipedia.org/wiki/Michel_Foucault
The new left: you give me unlimited sex and I won’t criticise your economic system.
The arts: even if you’re not a homosexual, you should act like a homosexual.
The Jews rejected baby Jesus because he wasn’t a big strong warrior leader David.
The Magi were humble enough to accept something that did not conform to their plan.

Jones was denounced by the Southern Poverty Law Center as an anti-Semite because he the temerity to write a book on the Jews.
https://www.splcenter.org/
https://www.amazon.co.uk/Jewish-Revolutionary-Spirit-Impact-History/dp/0929891074
49.00 mins
Polite people don’t talk about ‘Jews’
Wilhelm Marr created anti-Semitism
https://en.wikipedia.org/wiki/Wilhelm_Marr
…. a Jew is a theological construct

50.00 mins
Jesus is logos incarnate…..
The Jew is a theological concept; nothing to do with race; the Ashkenazi are not Semites.
Some of the Jews accept Jesus; the children of Moses or the Catholic Church…. the Jews have been revolutionaries since that time.
The Talmud is a long winded rejection of logos
You can begin with Simon bar Kokhba
https://en.wikipedia.org/wiki/Simon_bar_Kokhba
…. and take it all the way up to Amy Dean bragging how Jews gave us gay marriage…
How Jews Brought America to the Tipping Point on Marriage Equality: Lessons for the Next Social Justice Issues:
https://www.tikkun.org/nextgen/how-jews-brought-america-to-the-tipping-point-on-marriage-equality-lessons-for-the-next-social-justice-issues
They could not accept Jesus; they knew who his parents were i.e. God has to meet my standards!
It wasn’t the Messiah they wanted, so they killed him.

Jordan Peterson being asked about Aleksandr Solzhenitsyn’s book 200 Years Together:

Jordan Peterson Is Asked About ‘The JQ’ At His NY Talk

Jews score so well at SAT’s because they cheat.
https://en.wikipedia.org/wiki/SAT

We’re not going to tolerate this ridiculous double standard anymore. You’re just like everybody else, you should be held accountable; you don’t get a free pass because you are a Jew.
I love the Jews because they are my enemy.

End of video interview. I assume there is plenty of material above to invite accusation of anti-Semite, homophobia, misogyny, xenophobia and other ists and isms I’ve neglected to mention.

P.S. By contrast, Thomas Sheridan feels he can better manage Judaism to it’s hanger-on religions Christianity and Islam. Plus, he says, of course there was a holocaust.
Being Spirituality Authentic: