I bought, read and enjoyed JK Rowling’s 5 Harry Potter books. It was 10 years or more ago now, so without checking I think it is 5. The TV has apparently broadcast a documentary about the sweat and toil of Rowling’s early early years and today she is heralded as a successful heroine. Are we still allowed to use the term heroine or is that too gender binary in JK’s increasingly politically correct world? Mind you, with the swish of a wand JK could have a penis or not, couldn’t she? It’s bloody ridiculous. If you follow such news programmes as the https://www.nedpamphilon.uk/uk-column-news/ you will be aware agendas are much darker and sinister than the mere level of ridiculous. JK has sponsored and promoted children such as Bana as part of the appalling propaganda against Assad and the Syrian people. Now she has joined the anti-Semite band wagon. For an apparently clever and successful author and business woman she seems clueless of the ins an outs of Syria, Israel and the geo-political world. But, then so is the BBC. 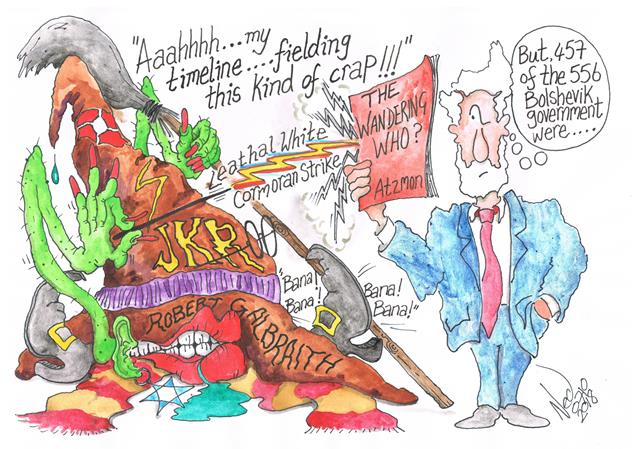 In J.K. Rowling’s new novel, a villain is an Israel-hating anti-Semite

For months author J.K. Rowling has been warning about the dangers of anti-Semitism in England, sparring on Twitter with critics who either downplay the phenomenon or say its proponents are confusing criticism of Israel with Jew hatred.

Now, in her newest book, she includes a character whose obsessive anti-Zionism morphs into anti-Semitism.

“Lethal White,” the fourth novel in Rowling’s Cormoran Strike mystery series, written under the pen name Robert Galbraith, features a pair of hard-left political activists who believe “Zionists” are evil and have a stranglehold on Western governments.

Extortionist Jimmy Knight’s extreme hatred of Israel has led him to hate Jews.

“I wouldn’t trust him if it was anything to do with Jews,” Knight’s ex-wife tells a detective. “He doesn’t like them. Israel’s the root of all evil, according to Jimmy. Zionism: I got sick of the bloody sound of the word. You’d think they’d suffered enough,” she says of Jews.

Rowling’s depiction of a far-left anti-Semite comes at a time of record high anti-Semitism in Britain, where she lives. Britain’s Labour Party and its leader Jeremy Corbyn have been accused of insensitivity to Jews and condoning anti-Jewish sentiments within the party’s ranks. Corbyn previously defended a grotesquely anti-Semitic London mural depicting Jewish bankers, and referred to his “friends” in terror groups Hamas and Hezbollah, though he’s said he now regrets these positions.

A September 2018 poll found that nearly 40 percent of British Jews would seriously consider emigrating if Corbyn became prime minister — as polls show he might.

The latest novel isn’t the first time the author of the Harry Potter series has commented on the dangers of anti-Semitism.

“Most UK Jews in my timeline are currently having to field this kind of crap, so perhaps some of us non-Jews should start shouldering the burden,” she wrote in April, in response to a critic who said Judaism is a religion, not a race. “Antisemites thinks this is a clever argument, so tell us, do: were atheist Jews exempted from wearing the yellow star?”

Rowling, who is not Jewish, also shared with her 14.4 million Twitter followers examples of posts she’d received that denied anti-Semitism was a problem.

To a commenter who posted that Arabs cannot possibly be anti-Semitic because Arabs are Semites too, Rowling tweeted a photo of a dictionary definition of anti-Semitism: “hostility to or prejudice against Jews.” She also included a spirited defense of Jews: “Split hairs. Debate etymology. Gloss over the abuse of your fellow citizens by attacking the actions of another country’s government. Would your response to any other form of racism or bigotry be to squirm, deflect or justify?”

When a Jewish mother tweeted Rowling to say her son had faced anti-Semitic bullies in school, Rowling tweeted back “so sorry” and wrote “Know that you aren’t alone and that a lot of us stand with you xx.”

A few months later, on Aug. 26, after a fellow mystery writer, Simon Maginn, tweeted that British Jews’ outrage over Corbyn’s views were “synthetic,” Rowling defended the Jews. “What other minority would you speak to this way?” she posted, before quoting from Jean-Paul Sartre’s essay “Anti-Semite and Jew.”

In 2015, Rowling declined to endorse open letters calling for a cultural and academic boycott of Israel and signed by over 1,000 British authors and opinion leaders. Instead, she joined 150 other writers and artists in penning an alternative letter opposing singling out Israel for opprobrium.

“Israelis will be right to ask why cultural boycotts are not also being proposed against…North Korea,” her Oct. 23, 2015 letter declared. Instead of boycotts, the letter said, “Cultural engagement builds bridges, nurtures freedom and positive movement for change.”

Rowling has been critical of the government of Israeli Prime Minister Benjamin Netanyahu but is adamant that Israel, its people and its supporters should not be subjected to a double standard by their opponents.

I am thoroughly enjoying President Trump; particularly the way snowflakes, the ‘left’, never Trumpers, the BBC, indeed the establishment persistently get their knickers in a twist about him. Obama was a war monger while thus far Trump has not initiated war. I am an enthusiast of Trump. But, Trump’s major donors are Sheldon Adelson, Paul Singer and Bernard Marcus. A cynic might even suggest such characters influence US foreign policy:
Follow the Money: Three Billionaires Paved Way for Trump’s Iran Deal Withdrawal:

Hey JK, how easy is it to buy a ticket and go visit Palestine as a tourist? I don’t know, I’ve never tried, but I do wonder.