The Turkish Saudi Khashoggi scandal. Trump redacted 28 pages of the 9/11 report. It seems if Saudi go down, they can take Israel with them. How will Trump manage the situation? 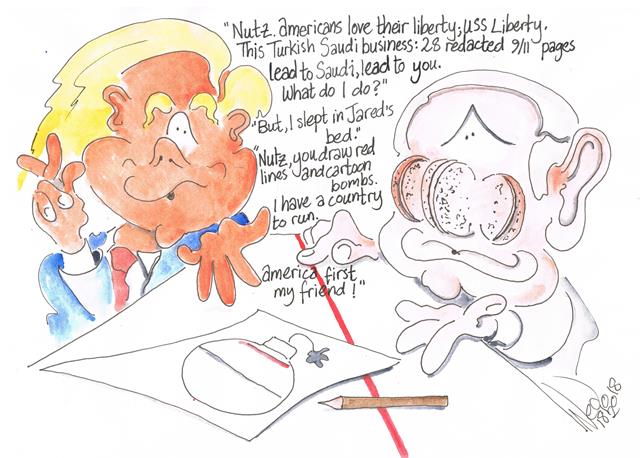 Saudi and Israeli seem to be connected with regard with all sorts, not least Syria….

Trump redacted 28 pages of 9/11 report which showed Al-Quaeda sponsorship by Saudi royal family.
The news didn’t report it…. because…
FBI full field reports from West coast implicate Saudi, but they have kept quiet since…
FBI full field reports on West coast implicate Israel
If the Saudis are brought down, ‘you’re (Israel) coming with us….’ hence the Zionist media have played down the Saudi involvement.
Prince Bandar and Prince Turki al-Faisal had provided money to the two hijackers of Flight 77 living in California, Nawaf al-Hazmi and Khalid al-Mihdhar, via the wives of Osama Basnan and Omar al-Bayoumi.
https://www.wilsoncenter.org/publication/saudi-arabia-faces-the-missing-28-pages
… Saudi complicity and the CIA knew, but failed to inform the FBI until the August before 9/11.
CIA financed, gave logistical support and protection from federal law agents.
That alone, makes 9/11 an inside job.
Add the even more damning stuff on Israel (Empire Unmasked 6 hour film by Ryan Dawson)
Iran-Contra was started by Israel sending contraband to Iran…. ending up murdering over 30,000 Nicaraguans